I put down the bottle and picked up a book. Reading saved my life! I went from booze hangovers to book hangovers and I am the happiest I've ever been!

The Golden Compass Brrrrrr........Is it a bit chilly in here? The Golden Compass is such a magnificent book in every way. It was so beautifully written, intelligent and so intensely creative. The story begins with an engaging, clever, yet sassy young girl named Lyra Belacqua and her shape-shifting daemon, him being her soul, Pantalaimon. Her best pal, Roger, is kidnapped one night as well as other neighboring children. Their disappearance along with many other strange happenings, sets off an obstacle of events that take Lyra and Pan into the coldest and darkest part of the world, the North.

Along the way they'll explore various landscapes and meet mysterious and mesmerizing characters such as Gypsies, Witches and Armoured bears called panserbjørnes. Philip Pullman creates a platform for very interesting topics of discussions about religion, death, war and love. Making it a very controversial book. The whole series, His Dark Materials and Pullman himself have been criticized as well as the hopes of the series being banned. Which I think these issues would lead people to want to read this story, so they can see all of it's strengths and how inspiring it is. The significant value of friendship and sacrifice. Qualities that every human being should try and mimic!! The Golden Compass turned out to be one of the most worthwhile, courageous and unique books I've ever laid hands on. I look forward to reading the next installments, The Subtle Knife and The Amber Spyglass. 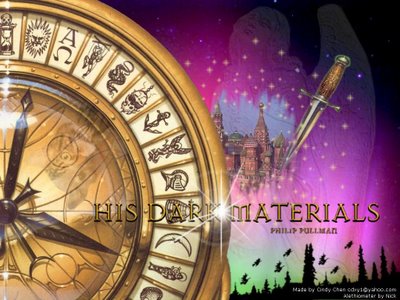